The Perfect Soft, Slouchy T-Shirt Shouldn’t Have to Cost $130

And yet it does.

At least once or twice over the weekend, I take my dog Sammy on a seriously epic stroll. He has never met a human or canine he did not want to get to know a whole lot better, and he goes batty without exercise.  I had an errand to run  on 3rd Street and Avenue A, a few Sundays ago so off we went.

We were confronted immediately by wildposters for the new Supreme ad campaign featuring Kate Moss (it might not actually be possible for anyone below14th Street to walk too far out the door without being similarly confronted; downtown had been carpet-bombed). Now, my thoughts regarding Ms. Moss are conflicted at best. The failed rehab; the pictures of her stumbling her way out of clubs and limos surrounded by a posse of enablers; the fact that the fashion world just turns a blind a blind eye. It bums me out. When I see a picture of her, that’s what generally governs my perception at this point.

And yet: every once in a while, I come across a new image of her that takes my breath away—and I am totally and completely fixated on this one. Forget what she’s wearing (even though it’s completely, perfectly, awesome). No model can summon you-want-to-be-as-cool-as-me with just her eyes like she can.  I somehow even manage to repress my pearl-clutching instincts about the fact that she’s setting such a bad example by smoking because she looks so cool doing it (God strike me dead). 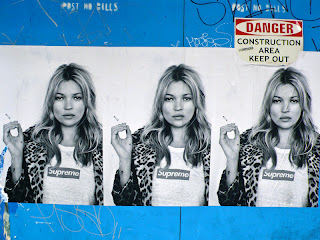 Incidentally: After completing my errand, Sammy and I crossed Houston so we could head up Stanton and through Nolita and Soho for the final leg of our trip. On Ludlow, we came across this black and white version, which somebody must have thought would read better on the gritty streets of the LES.

These brilliant Anna Sheffield rings read “Not to be fucked with,” and are meant to be employed as wedding bands. But I say they’re perfect for any occasion.  Via Bleach Black.

Bird can really mess
with a girl’s priorities

I adore my nephews above all others, and have worked hard to curry their devotion. First by hanging back like a cat and letting them come to me (boys will be boys, no matter what age) and then, their curiosity piqued, spoiling them within an inch of their tiny little lives. They return from visits with their Aunt Kim drunk on chocolate, high-fructose drinks, and hours of viewing the kind of television their parents find most corrosive to their development.

What they don’t always get from their Aunt Kim is attendance at their loud and sticky birthday parties. They don’t seem to mind much about this, but their parents do, and so on a recent Saturday, I  took the L out to  Williamsburg for a trampoline party . I’d been careful to time my arrival for the last hour—enough time to appear respectful, but only just— and was running late. When I got to Bedford and Grand,  I froze for a moment in my tracks: Bird was steps away! An immediate left and I could pop in for—what?—five, minutes? Tops. A quick scan of the racks and out.  But just as an alcoholic knows it will never be just one drink, I knew that five minutes meant closer to 30. So I kept on walking. Because family is family. And Bird has a fantastic ecommerce site.

A bit ambitiously priced, but I like this hippie chick top by Raquel Allegra. Especially from the back.

I have an irrational (and—given that they’d probably be more flattering for my body type than some of my current choices—counter-productive) fear of high waisted pants. But these are so elegant and wearable-looking.

How clever is this Fucci House ring?

This Michael Montiero print brings me more delight than words can express.

Chaos at the co-op